Embryonic stem cell research remains controversial because a living human embryo must be killed to obtain the cells. Huge ethical problems here. We have to destroy a life because maybe -- and it is a big maybe -- another person might be helped someday.

The "hype" about embryonic stem cells is such that you and many others probably believe "cures" are either happening or right around the corner for patients with illnesses like Parkinson's disease or diabetes. You are sadly misled. Even James Thomson, the UW-Madison scientist who first isolated embryonic stem cells, expressed as recently as January 2007 in an interview that "it may be decades before stem cells produce treatments that cure diabetes, Parkinson's disease or help the paralyzed walk again." Thomson said that there is more than a little "irrational exuberance" surrounding embryonic stem cells. 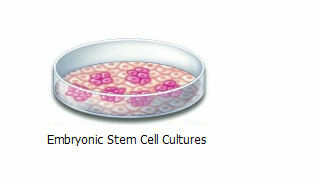 Dangers Found with Embryonic Stem Cells
Embryonic stem cells have not been placed into humans because the cells grow uncontrollably and could create tumors if put into a human person.

A new or frozen embryo is a unique member of the human family with his or her own genetic makeup or DNA. If embryonic stem cells are put into a different person, the cells will be rejected in the same manner as if a person receives a transplanted organ from another person. Immunosuppressive drugs with the accompanying risks and complications would be needed to prevent rejection of the cells.

Why Not Get Some "Good" from Frozen Embryos Which Are Going to Be Destroyed Anyway?
You probably feel on some level that we should obtain some "good" for people suffering from serious conditions by using frozen embryos that might be discarded. This line of reasoning ignores basic ethical principles that one human being should not be destroyed or used for the potential or even real benefit to another. And, this argument is being oversold.

Of the 400,000 frozen embryos in the United States, only 2-3% are potentially available for research purposes. If all 8,000 to 12,000 are donated, only 275 will be useful for creating stem cell lines after thawing and other processes, far too few for the number of researchers who want them. That's why scientists will likely eventually create human embryos through the process of in vitro fertilization or clone human embryos and then destroy them for research purposes.

Further, frozen human embryos don't have to be destroyed. They can be made available for adoption.

Is There an End to the Stem Cell Debate?

In what is regarded as a major scientific breakthrough, scientists in Wisconsin and Japan reported in late 2007 that they were able to coax ordinary skin cells into becoming pluripotent stem cells -- cells that have the potential to become any cell or tissue in the body. These cells are called iPS cells (induced Pluripotent Stem Cells). No living human beings had to be destroyed to achieve this discovery which is revolutionizing this entire area of research.

This process has been replicated by many research labs all over the world. To be certain, the ethical controversy over destruction of human embryos has been minimized, if not completely mitigated, by this discovery.

The practical benefits are enormous. It is far easier to extract skin cells from a child or adult than to create and destroy an embryo or gain permission to use and destroy a frozen embryo. There is a limited supply of frozen embryos. Embryonic stem cells will be rejected because they carry the DNA of a different human person; using a person's own cells eliminates the rejection factor.

Human cloning, and all of the risks and disadvantages associated with this process, is no longer necessary. Women will not have to undergo risks to produce enough eggs to allow human cloning to be practiced. The perceived need to create chimeras (which are part animal - part human) to carry out human cloning is eliminated.

iPS cells contain the same growth problems associated with embryonic stem cells and are too dangerous to put into a person just yet. This discovery should not halt in any way the incredible progress of adult stem cells which are helping real people with real diseases.

It remains to be seen if scientists will "cling" to embryonic stem cell research or move to ethical and practical research using iPS cells. James Thomson, the Wisconsin scientist who isolated the first embryonic stem cell in 1997 and co-discovered iPS cells in 2007, has formed two new research companies. The fact that Thomson, perhaps the world's leading scientist in this area, is working exclusively with ethical iPS cells in his own companies is a beacon of hope for forging ahead to learn new ways to treat illnesses and conditions without destroying human lives.

Thanks to the moral fortitude and diligence of many, we have learned, once again, that advances in the treatment of human persons do not have to sacrifice one person for the benefit of another.