When They Say You Say 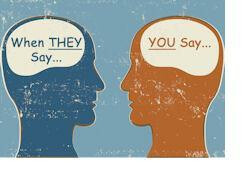 When They Say:
“If a woman is raped, she should be allowed to have an abortion. After all, that child will do nothing but remind her of the trauma she suffered.”

You Say:
“First of all, the incidence of pregnancies resulting from rape is very rare. However, even in small numbers they do occur and it’s important for us to address that.

Rape is a horrible crime – perhaps the worst that can be committed against a person, short of murder. But let’s look at this logically. The guilty party – the rapist – if caught and convicted serves an average of just under 14 years for his crime.1 How then is it fair to punish the second innocent victim of the crime – the child – with the death penalty?

Abortion does not erase rape – in fact, women who have experienced abortions for reasons of rape often refer to the abortion procedure as ‘the second rape’ or ‘the mechanical rape’ because of the physical nature of the procedure. In fact, some even say that the abortion was more psychologically damaging than the rape itself because in the rape they were an innocent victim, but in the abortion they participated in violence against both themselves and another innocent victim… their child.

This brings us to the final point re: abortion for reasons of rape. The child conceived through rape isn’t just ‘the rapist’s child,’ he or she is the victim’s child. Killing one’s own child, regardless of how that child was conceived, does NOT help any woman. We need to offer women life affirming options when they are faced with horrifying circumstances. After suffering through a rape, women can take back control by offering life to their unborn children.”

When They Say:
“Abortion should be legal in cases of incest, the victims of which are usually far too young to bear a child.”

You Say:
“Incest is a horrible crime that shatters the lives of its victims. While pregnancy resulting from incest is rare, (1% or less)2 it does still happen. We need to address this compassionately in regard to both victims – the girl and her unborn child.

While pregnancy at an early age is not ideal, it is actually safer for a young girl than abortion which has serious physical implications, to say nothing of the intense psychological damage it causes.

Finally, abortion for cases of incest does nothing to help the victim. In fact, it covers up the abuse by destroying the ‘evidence’ of the crime – the unborn child – and in many, many cases returns the wounded girl to the same dangerous circumstances that caused the pregnancy in the first place. When faced with a young woman pregnant as a result of incest, we need to provide loving options that will care for both the girl and her innocent unborn child.” 2

Life of the Mother

When They Say:
"Abortion should be legal to save the life of the mother."

Health of the Mother

When They Say:
"What about the health of the mother?"

You Say:
"The mother needs excellent medical care to protect her health as well as that of her baby during pregnancy. If it were possible that abortion be prohibited with an exception to protect the health of the mother, she could have a legal abortion for virtually any reason. The U.S. Supreme Court in its 1973 Doe v. Bolton decision defined health as all things relating to a woman's situation, including emotional and financial well-being."

Was this page helpful to you?  If so, please consider a donation to the Wisconsin Right to Life Education Fund.  Thank you.

1.http://www.montgomerycountymd.gov/content/hhs/vasap/sexualassaultmythsandfacts.pdf
2. Maloof, "The Consequences of Incest," The Psychological Aspects of Abortion, University Publications of Amer., 1979, p. 74 245